Behind The “Scene”: Talking To Jacqueline Coley

In the pilot episode of the Focus Features Facebook Watch original series “You Know That Scene,” Jacqueline Coley (editor, Rotten Tomatoes) leads a spirited conversation on African American filmmakers among film writers and cultural influencers Scott Mantz (president, LA Online Film Critics Society), Matthew Hoffman (correspondent, Regal Cinemas), Wendy Lee (actress/content creator, Collider), and Trisha Hershberger (entertainment influencer, host, producer), the role of host rotating among the panelists in each episode. As an editor and journalist, Coley brings her experience and expertise to the panel by making the movies we love part of a larger conversation about cinema, politics, and society. The pilot, “African American Filmmakers,” is currently streaming on Facebook Watch. Future episodes include “LGBTQ+,” “Politics,” “Legacy,” and “Women in Film.”

We talk with Coley about her own journey as a film journalist, what’s happening in film today, and what excites her about upcoming “You Know That Scene” episodes.

Watch the Pilot episode of “You Know That Scene," focusing on a discussion on African American filmmakers

You’ve worked for various sites at different positions. How did you get started as a film journalist?

When I tell the story of getting started, I go back to Ava DuVernay who picked up a camera at age 32. We’re not the same age, but I also came to this late. I started about five years ago. I was always a writer, always a creative writer, but like a lot of African Americans who were the first generation to go to college or pursue an advanced degree, writing was not something that I really wanted to tell my mother I wanted to do, to tell her “after all the time and expense you put out to send me to college, I want to get a creative writing degree that could probably never pay the bills.” I worked in business for a decade after I got out of school. But through freelancing at sites like The Huffington Post, Indiewire, and Black Girl Nerds, I started to hone my craft as a film writer. Most gifted writers that I read and love didn't come out of the womb like that. They kept at it and they got better. That was my journey.

How did you learn about film?

I’ve always been a fan of film. When I was younger, I worked in local video stores and movie theaters, worked in the theater community. I was definitely on the cusp of it, but it was never my profession. I am originally from Alabama by way of Texas, where I went to the University of Texas in Austin. I minored in musical theater and creative writing. If I could have, I would have majored in creative writing and minored in musical theater, since I obsessively studied both of those as much as I could. I learned about film everywhere. I took this great online film course from MIT. Today there is so much you can pick up about film online just as if you went to USC film school.

When did you fall in love with film? What was the first film that touched you? The first one that transformed your view of the world?

I can’t tell you the first film that touched me, but I remember when I fell in love with movies. My father, who worked in the film industry as a driver, would wake me up early on Saturday to watch TCM. They usually played all the westerns then. While I appreciate westerns like Shane or El Dorado, my dad watched every John Wayne movie. When they did their classic musical month, however, I was transformed watching movies like There's No Business Like Show Business, Singin' in the Rain, and the Judy Garland A Star is Born. I was obsessed with Seven Brides for Seven Brothers. I told the kids at school about it, and they were like, "What are you talking about? Why are you telling us about this movie about seven dudes marrying seven chicks?" That was not what most eighth graders talked about. I realized then that I was different, that not everyone got obsessed with movies like these.

The film that transformed me? My biological father and my mother are both African American. But my mother divorced my father when I was very young and married a white man, and I was pretty much raised by him. There were so many elements of Spike Lee's Jungle Fever  that rang true to me. In that movie, the Wesley Snipes character leaves his black wife to date this non-black person. That whole idea of people from two races trying to come together while everyone around them is against them—that is when I realized that films can talk about your life and maybe get people to understand it. When people asked me what was it like growing up in my household, I tell them, "Just watch this movie."

Having been a keen observer of the film world for a while, what do you think has changed? What hasn’t changed at all?

What has changed the most is many important people realize that if they are going to be non-progressive about inclusion in the filmmaking process, they are going to receive pushback. It used to be that deals were done in the dark. If you had an all white cast and crew, people might notice it, but no one was going to call you out on it. Now people are vocal about it. If you don't make your cast and crew diverse, if you don't have inclusion riders, if you don't ensure that the junket has an equal make up, you'll be called out. What has not changed is that there are still lots of people who keep doing the same thing, although quietly. Some people are making changes for diversity now, but in a few years may very well go back to doing what they used to do. 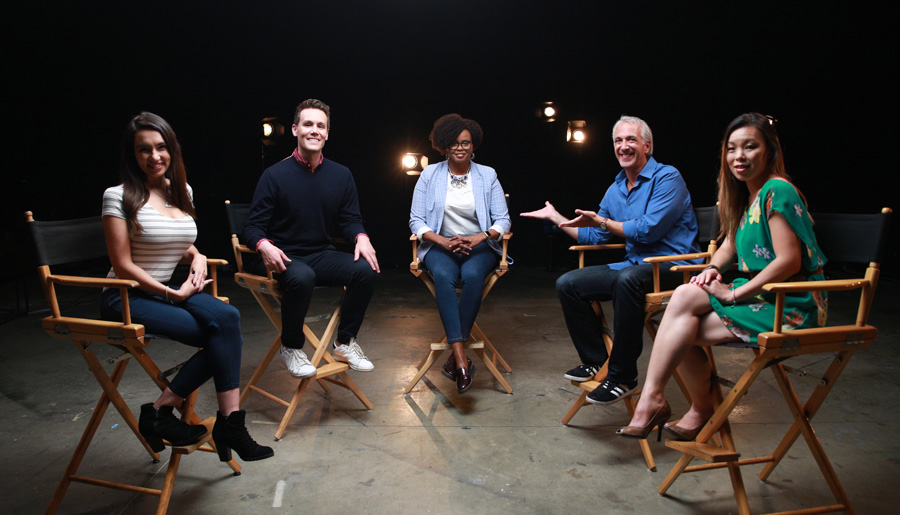 In moderating the panel, what did you learn?

As an African American, I bring a specific perspective to African American film. It is really refreshing when I am with non-black filmmakers and influencers and get to hear their perspective. I hear people say things like, “I didn't realize how much this has not changed." We are looking at older films and we realize that we still dealing with the same stuff they dealt with years ago.

What will audiences see in upcoming episodes?

When you look at the Focus Features’ catalog, you see just how diverse it is, not just with African American filmmakers, but also with all facets of the filmmaking experience. It captures the full human experience. I don't think that is by design, but rather by just finding great stories to tell. Over the course of the entire season of “You Know That Scene,” we’ll touch on a lot of different perspectives. Each episode and every topic will have a different flavor.

Are there particular episodes you are looking forward to?

Politics! They are all great, but I think the politics episode is going to be very poignant. We talk about films like Milk, but not in a divisive way. More like, “Let's look at this. Even though we’ve made films that deal with these issues, we are still dealing with them.”