A Q&A with the creator of SteppingThroughFilm

Which one of us has not been so enchanted by a movie that we haven’t dreamt of living in its world, of finding some wondrous portal that connects our everyday surroundings to its magical realm? Thomas Duke, who is studying film and television at Brunel University in London, has turned that cinematic fantasy into an Instagram reality with his SteppingThroughFilm project. Traveling to the actual locations where his favorite films were shot, Duke uses a scene from the film to link his two worlds.

We spoke with Duke about his project, why many of his favorite films are from Focus Features, and what it feels like to find the right location.

How did you first come up with this idea of framing images from your favorite films in the actual places where they were shot?

I had seen people do a similar thing when I was a kid and always wanted to do something like that. After I went to uni, I was able to travel a bit more and thought I could give this a go. I started in London, which is where I’m based, and jumped into films that I loved and watched as a kid. 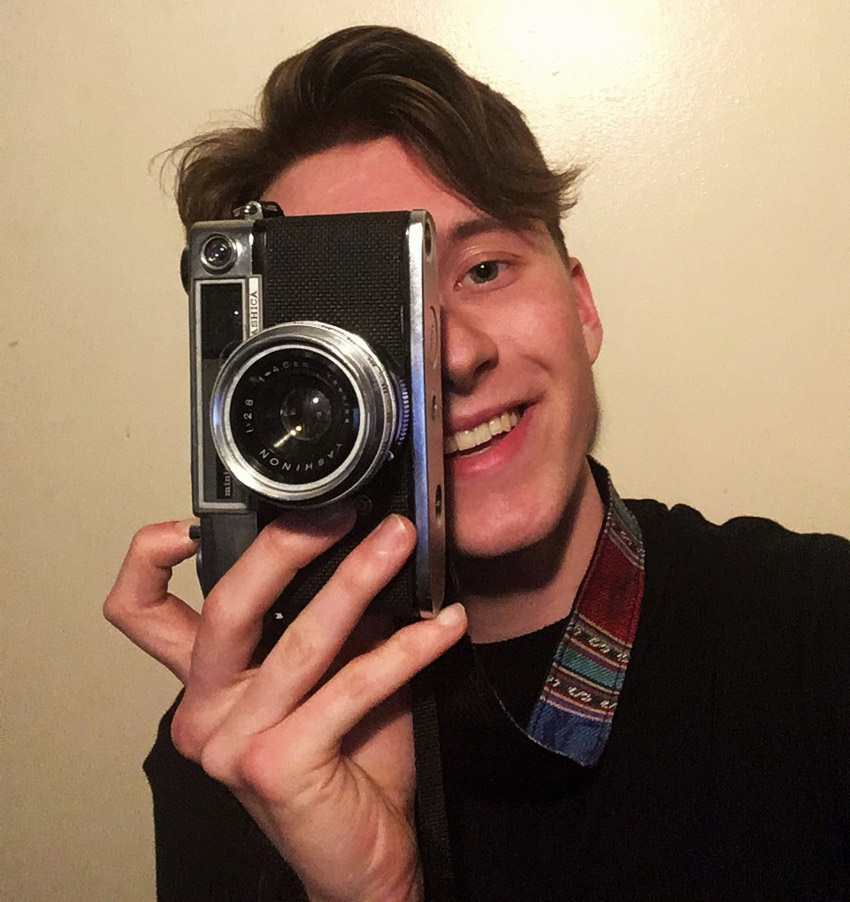 Tell us a little about yourself.

I am from Hertfordshire. Everything that I do revolves around film. It is my passion and inspiration. The photographs are just one element of what I do. Right now I’m at my first year at university and am interested in reviewing and looking at the deeper meanings behind films. I use real world situations in my pictures to try to inspire people.

What was the first film you shot?

The first one was Sherlock Holmes, because Robert Downey Jr. is one of my idols and the film was shot in London. I choose films that inspire me. I mainly use YouTube or a DVD to find scenes that I want to shoot. Finding the actual locations in London are quite easy because many of them are landmarked. For more distant locations, I use Google to research different villages and areas, or I study behind-the-scenes footage to learn as much as I can about the production. Then I travel and hope for the best. Even when I have to travel someplace far away, I know at the very least I will have visited and explored someplace new.

For Hot Fuzz, you picked the showdown in the town square for your homage? How did you find that location?

A couple months back I decided I was going to do the entire Cornetto trilogy—Shaun of the Dead, Hot Fuzz, and The World’s End. I love Hot Fuzz for its humor and sheer Britishness. It’s very popular with people my age. The scene was shot in the town of Wells in Somerset, which is right by Bristol. It took about four hours to get there. It is an absolutely beautiful little town. And it was amazing for me to walk through a place I’d seen on screen for so many years. When I think of what film I want to do, I always think of what scene will look good and what is iconic. Hot Fuzz is known for its action, so I thought I’d shoot that. Although the swan pictures I took blew up on Twitter. 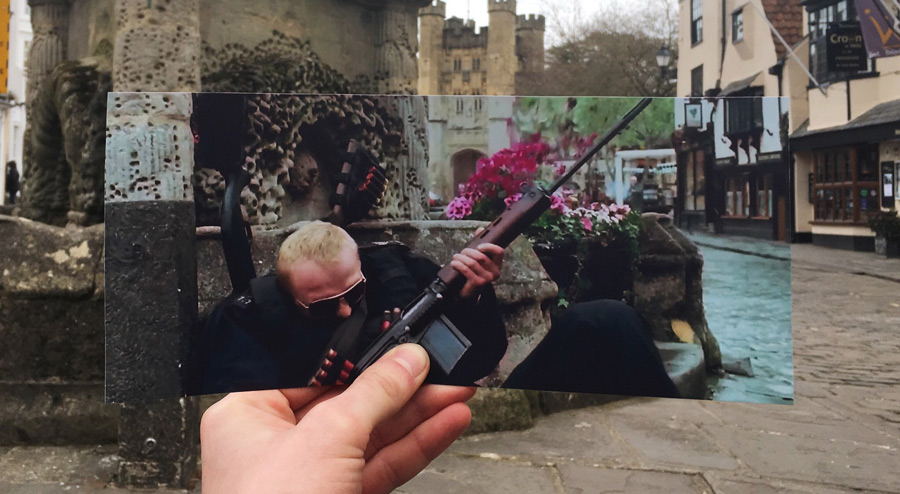 For Shaun of the Dead, you shot the street where Shaun and his gang join up with the zombies.

I chose that scene because it was the most recognizable and was really funny. It was easy to find that street because it was in London and I’m quite familiar with everything in the area. The only thing is that Shaun was shot fourteen years ago and a lot of stuff has been built or changed since then. 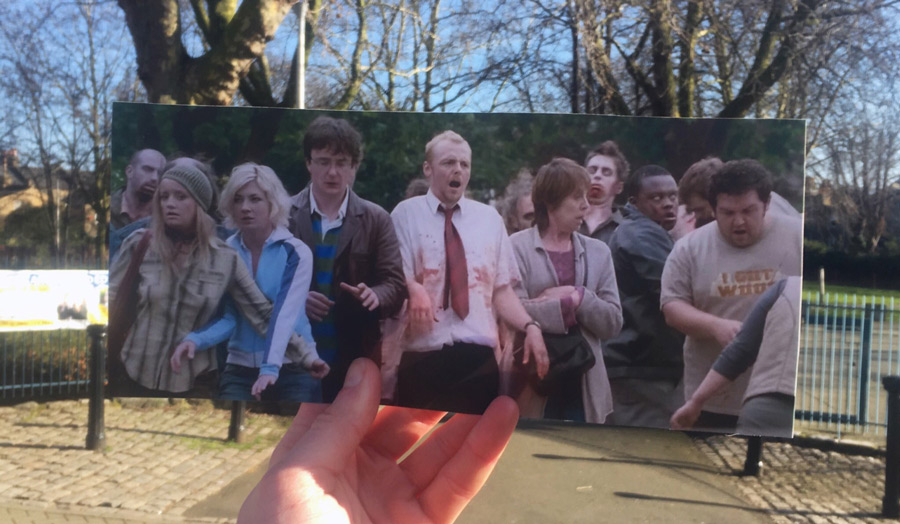 Finding Shaun of the Dead on the streets of London.

The shot from Atonement with James McAvoy alone in a field must have been hard to find. How did you track it down?

I could speak for hours about Atonement. James McAvoy is one of my favorite actors and that film completely broke me. Every time I watch it, there are so many emotions that run through me, about regret and how such a small thing can change a life. I chose that scene because it was so significant—it is one of the last times we see Robbie Turner—and it is so beautiful. It took me a long time to find the field. I knew it was Cambridgeshire, so when I got off the train, I just started walking. I kept going and going, but nothing looked quite right. Then I found this field that looked like the scene from the film. 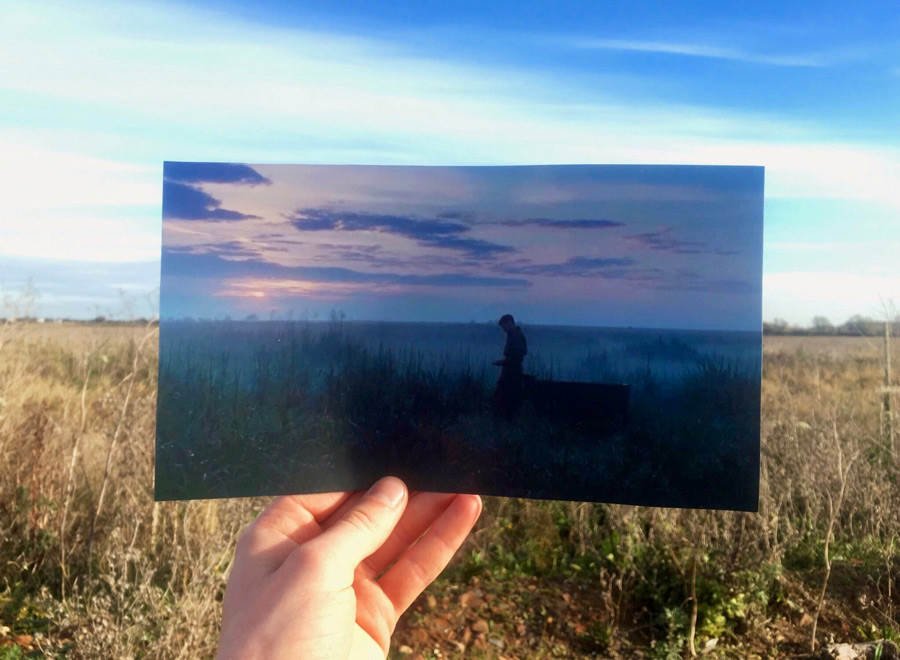 I suppose that the scene from The Theory of Everything was fairly easy to find?

I visited Cambridge a lot as a kid, but I’d never been in the colleges before, which was a complete waste because they’re beautiful. The Theory of Everything really touched me because of the story. This scene was shot at St. John’s College. It was a poetic little scene with the punters on the river alongside. I just had to pay a little fee to get into the college and this little garden area. 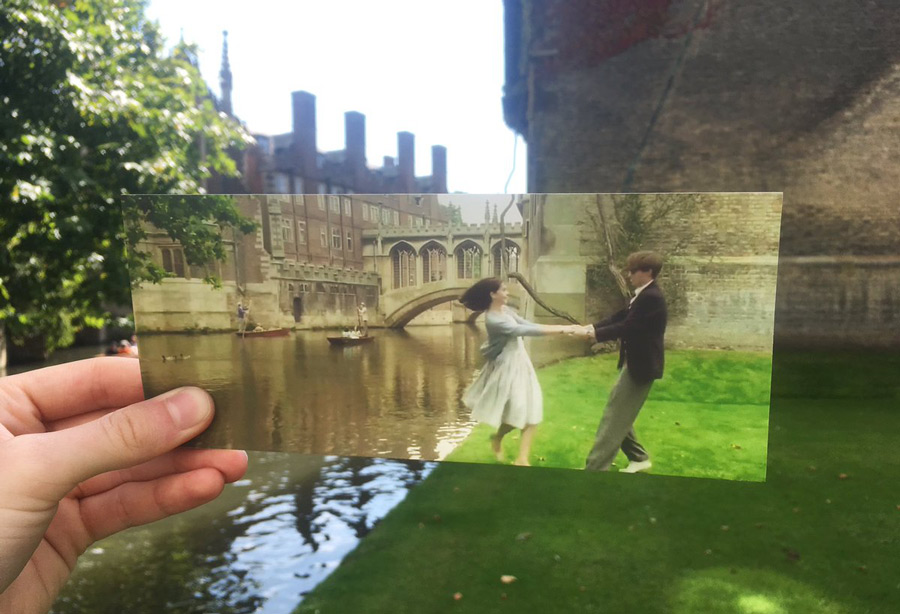 The Theory of Everything at St. John's College at Cambridge University

You call this project on Instagram SteppingThroughFilm, which seems like what you are actually doing with these photos. How does it make you feel to be so physically connected to the movies you love?

The meaning is in the name. Quite literally my heart is racing as I am getting to these places. Some people might not feel anything, but if you know the film and love the film, it’s an amazing feeling to be there where memories were made for you. It feels like everything that I’ve done in the past 19 years of my life has culminated in me standing there at that moment.

Get Hot Fuzz now on iTunes or at Amazon.

Get Shaun of the Dead now on iTunes or at Amazon.

Get Atonement now on iTunes or at Amazon.

Get The Theory of Everything now on iTunes or at Amazon.