Finding Japan In Lost In Translation

Iconic spots put on the map by Sofia Coppola’s film

Of all the films that have inspired wanderlust, none has enchanted audiences with its locations more than Sofia Coppola’s Lost in Translation. Bob Harris (Bill Murray) is a Hollywood star being paid a hefty sum to make a Suntory Whiskey commercial in Tokyo. Having traveled to Japan with her photographer husband John (Giovanni Ribisi), Charlotte (Scarlett Johansson) is then left alone when he goes off on assignment. Strangers in a strange land, Bob and Charlotte meet as guests at the Park Hyatt Tokyo, striking up an unlikely friendship. Since the movie opened in 2003—being nominated for four Academy Awards® and winning Best Original Screenplay for Coppola—its lyrical portrait of Japan’s capital has inspired hundreds to revisit Bob and Charlotte's adventures in Tokyo and beyond. In Departures, John Burnham Schwartz—whose own novel was adapted into Reservation Road—marvels at the cinematic alchemy by which Coppola conjured up the special feeling of being in Tokyo, how “in this most strange and crowded and foreign of cities, one’s heart is at the same time inexplicably free and open in a way that it is perhaps nowhere else.”

As part of our summer travel series, we retrace the steps that Charlotte and Bob took in Japan, from the calmness of a Zen temple to the clamor of a Karaoke bar.

Get Lost in Translation now on iTunes or at Amazon.

The official trailer for Lost in Translation

When Sofia Coppola first approached the Park Hyatt Tokyo, a place central to both the story and her imagination, about shooting Lost In Translation on site, the hotel balked. Housed in the Shinjuku Park Tower, the hotel occupies the top floors (39-52), allowing its guests a respite from the busy neighborhood below as well as magnificent views of the city. Having stayed there during her promotional tour for The Virgin Suicides, Coppola fell in love with the hotel. “It’s just one of my favorite places in the world. Tokyo is so hectic, but inside the hotel it’s very silent,” explained Coppola. She also loved how the hotel's eclectic mix reflected the spirit of her story. “This New York bar…the jazz singer…the French restaurant, all in Tokyo. It’s this weird combination of different cultures.” Even though the hotel normally refuses any film production, always wanting to put the comfort of its guests first, it fell in love with Coppola’s charming tale of unexpected friendship, permitting the production use of many of the hotel’s key locales, such as the New York Bar, its world class  spa, and its Olympic-size swimming pool surrounded by full-length windows.

Shinjuku | The neighborhood of lights

In the beginning of Lost in Translation, a jet-lagged Bob Harris is driven through the dazzlingly candy-colored neon streets of Shinjuku, even staring up a billboard of himself advertising Suntory whiskey. The area, which hosts some of the city’s most stunning and brightly lit skyscrapers, came into vogue after the 1923 earthquake. Being one of the few seismically stable spaces in the city, businesses quickly moved there. While much of the area was razed during World War II, it was rebuilt in the 1950s, and then experienced a real boom in the 1970s when developers raced to put up bigger and brighter corporate headquarters. It quickly became one of the city's most important government and business centers, as well as a major transit hub. 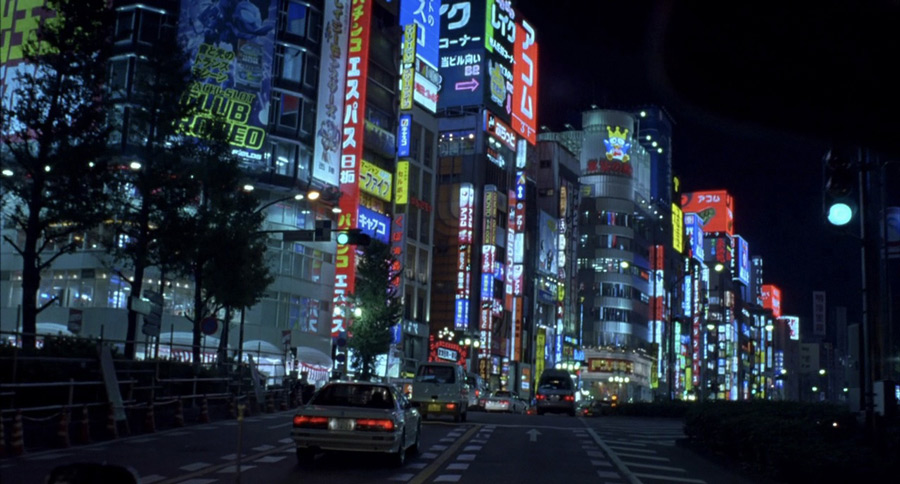 Driving into Shinjuku in Lost in Translation

Animated dinosaurs walking across the glass fronts of skyscrapers highlight the famed intersection known as Shibuya Crossing. On par with New York City’s Times Square, about 2,500 people coming in three different directions cross through the intersection every time the light changes. The intersection, and its mad scramble to cross the street, has become emblematic of the order and chaos of modern Tokyo life. Throughout the film, Bob and Charlotte wade into the famed intersection on their way to explore the city. 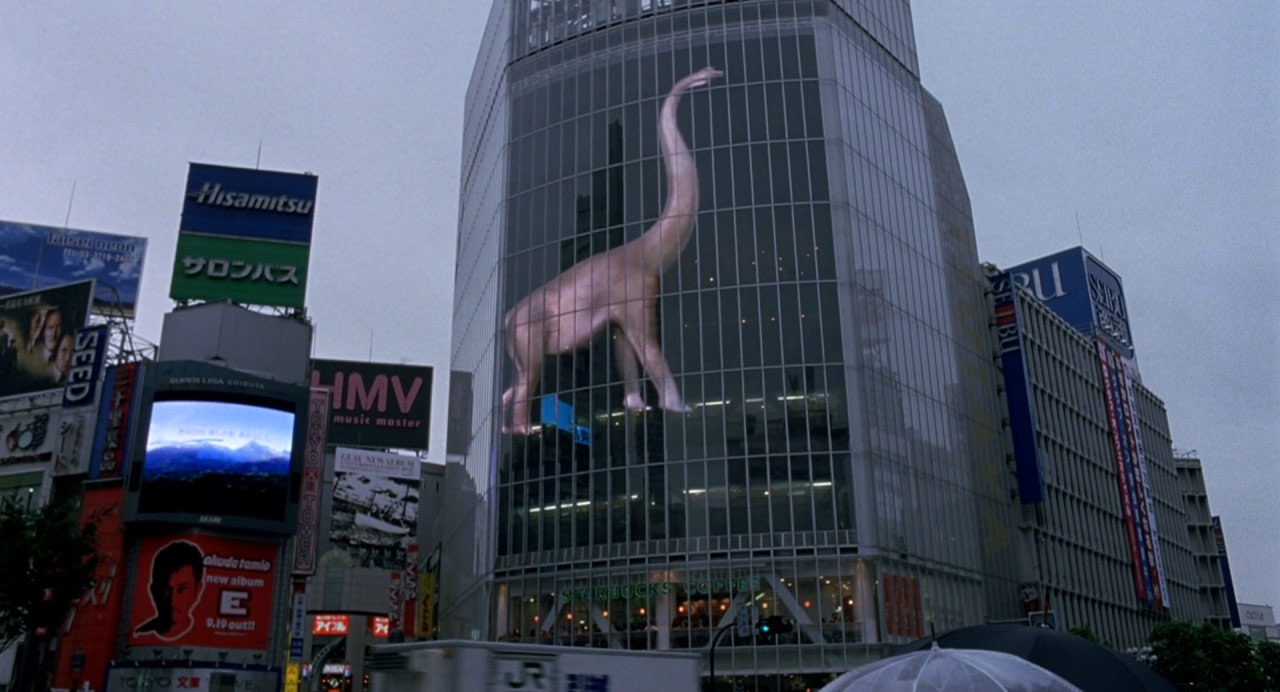 On a night out, Bob and Charlotte end up in Karaoke Kan Shibuya, the Shibuya branch of one of Tokyo’s most popular karaoke chains. Located in a tower, some of the private karaoke rooms—like rooms 601 and 602 used by Bob and Charlotte—have windows looking down onto the neon-lit city. If you can book those rooms, you too can croon Roxy Music’s “More Than This” to an adoring crowd, just like Bob. Of course, Karaoke—a Japanese word that translates as “empty orchestra”—is everywhere in Tokyo, being one of the city’s favorite pastimes.

While Sushiya no Ichikan, the tucked-away sushi bar visited by Charlotte and Bob in the Daikanyama neighborhood, is now closed, one can still find a meal at Shabuzen, the shabu shabu restaurant where the two dine. While their meal proved a bit tense in the movie, the food remains as delicious as ever. Famous for its all-you-can-eat hot pot cuisine, the restaurant employs  traditionally costumed servers to assist customers with cooking their own meal at their table. Fans of the film might notice one small change. The booths used by Bob and Charlotte have been replaced by chairs. 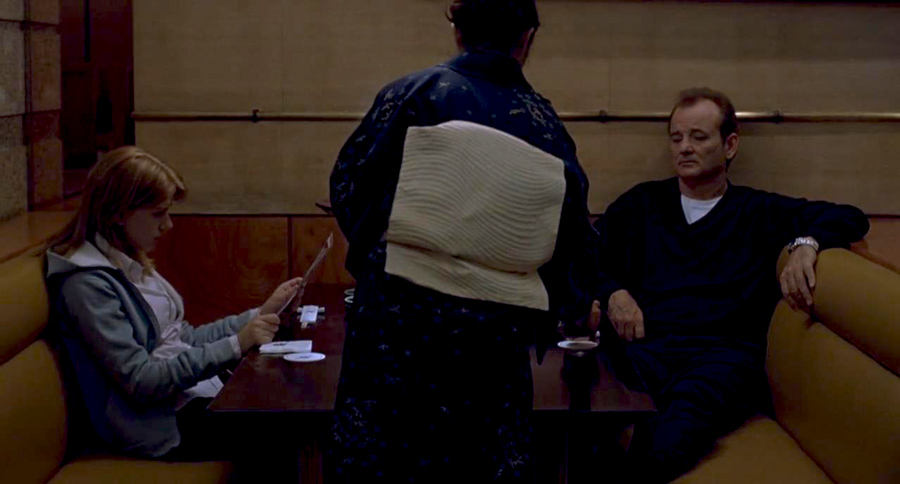 Kyoto’s Temples | An afternoon of peace

Halfway through her stay, Charlotte takes the bullet train (shinkansen) to Kyoto to visit several famous sites. At the famous Nanzenji temple, a sanctuary of Zen contemplation, Charlotte wanders the grounds, climbing the steps to the Sanmon Gate, where she witnesses a traditional wedding party making its way down the temple’s path. Built in the 13th century for the Emperor Kameyama, the compound was later converted into a Zen temple. She also visits one of Kyoto’s notable spots, the Heian Shrine. Unlike many of the city’s other memorable places, the Heian Shrine is quite recent. Built in 1895 to celebrate the 1,100th anniversary of Kyoto becoming Japan’s capital. Done in the style of the Heian Period (794 to 1185), the compound takes its visitors back to Kyoto’s glory days, including the beautiful garden whose pond Charlotte crosses by skipping across its stepping stones.

Kawaguchiko Country Club | In the shadow of Mt. Fuji

If Charlotte finds serenity at a Zen temple, Bob takes to the greens to find peace. Golfing at the Kawaguchiko Country Club, located southwest of Tokyo and about nine miles from Mt. Fuji, Bob’s short scene taking a swing with the iconic Japanese mountain in the background, has become beloved by golfers and non-golfers alike. “Coppola gave us perhaps the purest golf moment ever on film,” exclaims the golf quarterly Kingdom. “Murray tees up, takes a practice swing and simply hits his ball into the Zen landscape…In a single moment, a perfect snapshot of golf and the levity it offers within our chaotic world.” Unfortunately savoring such serenity on your own may prove difficult as the club is both private and quite expensive. 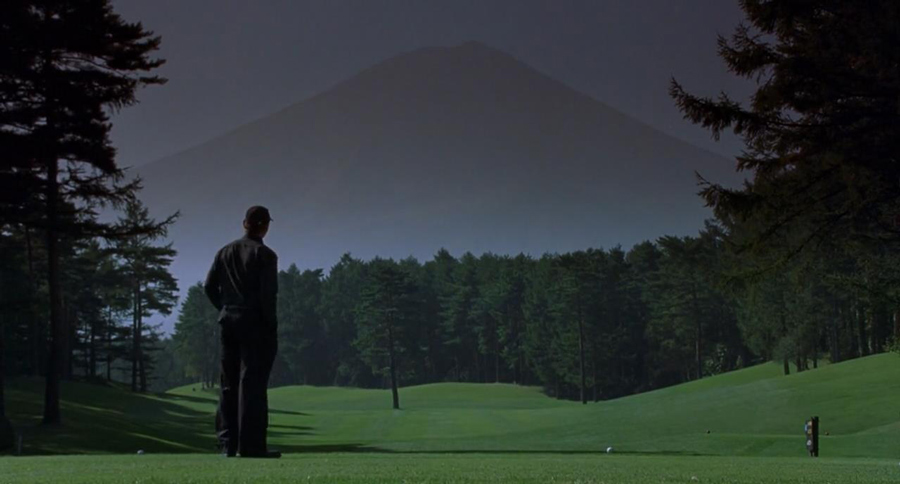